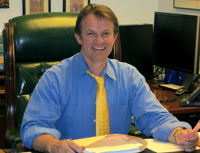 A member of the bar in the states of Illinois and Indiana, he has published numerous articles and has spoken extensively on the topic of property taxation. He is a June 1985 graduate of John Marshall Law School in Chicago.

Prior to the 1987 opening of his practice, he was employed at the Cook County Assessor’s Office where he was assigned to the Research and Standards department and eventually became a Certified Illinois Assessing Officer. He also served stints as General Counsel for IBEW Local # 134 and as a director and Chairman of Evergreen Bank. Before attending law school, he was employed as a polygraph examiner, having trained under the direction of John E. Reid. The eldest of parents that immigrated from Ireland, he was born and raised on the south side of Chicago.

A dedicated conservationist, he likes to  participate in a forest restoration project that has included the planting of over 175,000 hardwood trees.

Publications
The Election of Joseph Berrios, A Mandate for Professionalism and Accountability in the Assessment Process
By: John P. Fitzgerald
PropertyTax.com Network
December 20, 2010

Chapter 10 Is it Real or Personal?
Edited by: John P. Fitzgerald
Property Tax Handbook: Institute for Professionals in Taxation
Winter 2005

For more information about our services:

Other offices in Chicago